Canberra MRT station (NS12) is an elevated Mass Rapid Transit (MRT) station on the North South line, located along Canberra Link at the junction with Canberra Way in Sembawang, Singapore. It is the second infill station on the MRT network (after Dover MRT station), and the first in Singapore with a platform linked directly to an overhead bridge at the same level. With several green features included in the station during construction, it was also the first MRT station to be awarded Platinum for the Building and Construction Authority’s Green Mark for Transit Stations, as a result of the construction team’s efforts to integrate landscaping and using eco-friendly materials in the construction of the station.

The station was announced following a successful feasibility study conducted by the Land Transport Authority (LTA) after the idea of a new MRT station between the Sembawang and Yishun MRT stations was raised in the 2013 Land Transport Master Plan. Construction started in April 2015, and it opened on 2 November 2019. The mall opposite the station, Canberra Plaza, opened on 18 December 2020.

The new Canberra MRT station on the North-South Line (NSL) will open for service on 2 November 2019.  This was announced by Coordinating Minister for Infrastructure and Minister for Transport Khaw Boon Wan when he visited the station site today to observe the final day of the three-day staged NSL closures to facilitate works for Canberra station.

2.   Construction works for Canberra station commenced in April 2015. As part of the project, a new 72-metre long rail crossover track is being constructed near the station to connect the existing tracks leading to and from the station. The crossover track will enhance the resilience of the NSL by allowing trains to cross from one track to another when the need arises. A three-day staged closure (May 18 to 20) of up to five MRT stations between Admiralty and Yio Chu Kang was planned to facilitate the construction of the crossover track.

4.   System integration testing and certification works are being carried out today before passenger service resumes tomorrow morning (May 21).

5.   Canberra station is located between Sembawang and Yishun MRT stations on the NSL. It is the second station, after Dover station opened on the East-West Line in 2001, to be built on an existing MRT line. When operational in November 2019, Canberra station will serve upcoming residential developments as well as existing public housing estates such as EastLink I and II @ Canberra and Eastwave @ Canberra. Over 17,000 households will be within a 10-minute walk of the new Canberra MRT station. This is expected to save nearby commuters up to 10 minutes in travel time towards the city centre or Jurong East.

6.   Canberra station will have five entrances providing accessibility to nearby housing estates. It is also the first elevated MRT station to provide commuters with direct access to the city-bound train platform via an elevated link bridge across Canberra Link. For added convenience, the new station will be connected by sheltered walkways to nearby bus stops, pick-up and drop-off points, and will have more than 500 bicycle parking lots.

7.   With the new Canberra station, the North-South Line will now have 27 MRT stations, connecting commuters from Jurong East to Marina South Pier.

Fill up the form on the right and get a copy of The Watergardens at Canberra Price, E-Brochure, and Latest Updates! 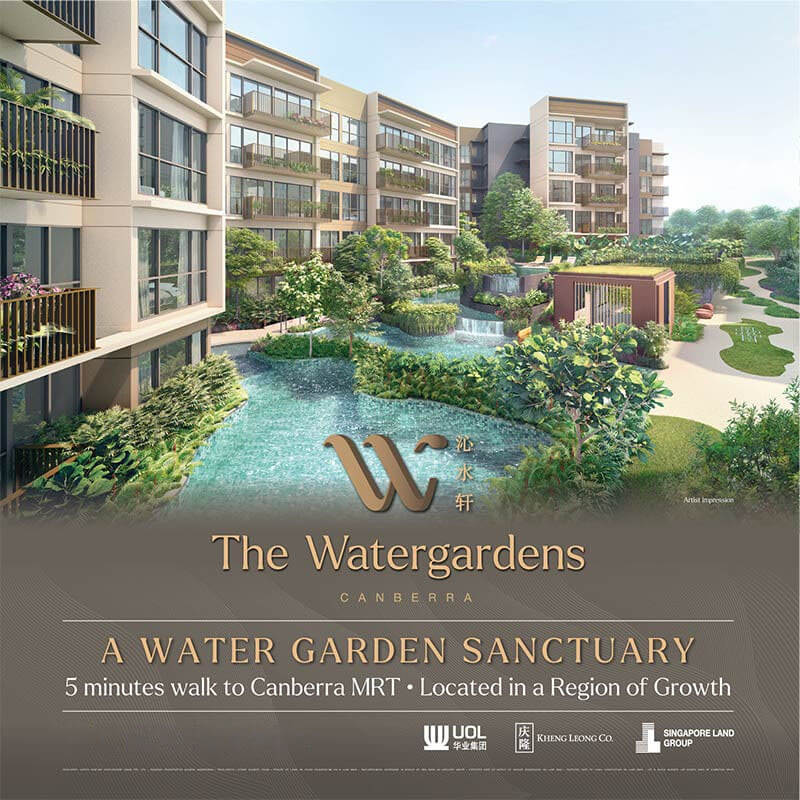 Copyright © | The Watergardens At Canberra | United Venture Development (2020) Pte Ltd | +65 6100 8717 | Singapore | No part of this website may be reproduced, distributed, or transmitted in any form without the prior written permission by United Venture Development (2020) Pte Ltd. All project info and plans are subjected to change by the building authorities without prior notice.

error:
Over 92% Sold! Viewing By Appointment Only!
+ +
Chat Now!
1
Welcome to The Watergarden at Canberra!
Hello! Thank you for visiting
The 💦 Watergarden 🌲 at Canberra‼️


Viewing by Appointment.
Chat with us Now to find out more!